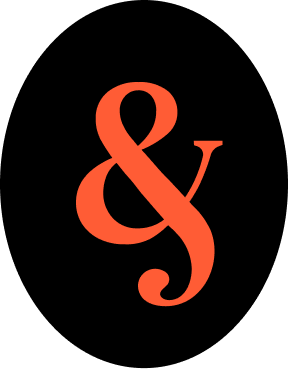 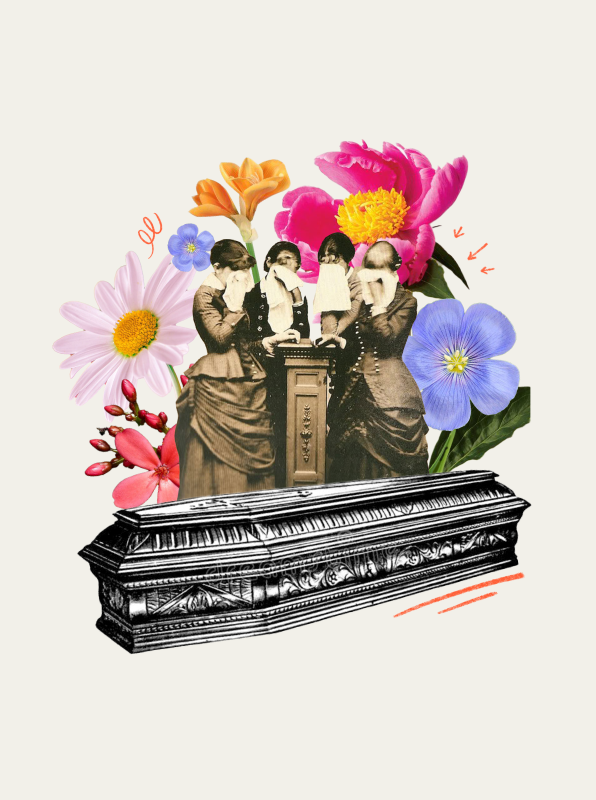 I was 15 and it was the first time someone my own age had died. I wandered through the funeral home with my friends and, even with a room full of high school kids, everyone was talking in very hushed tones. Organ music was piped into every room. Flowers spilled out of baroque-looking urns. It was, in a word I used a lot back then—boring.
‍

Those rooms, the floral wallpaper and the mauve carpet transcended space and time. I was transported back to my grandmother’s wake six years earlier. Just swap out the body on display and the template more or less remained the same. Nothing of my friend Jeremiah—my costar of just three weeks prior in the school play—was represented. He would have been bored, too.
‍

We are customizing nearly every other human experience to add a touch of our unique personalities to our weddings, our homes, and even our custom-blended shampoos—shouldn’t we be represented and remembered best of all in our deaths?
‍

In a £102B industry that has remained relatively unaffected by cultural and societal changes in the last 120 years, a revolution is quietly stirring. After a pandemic that has killed more than 6.5 million people worldwide we are more confronted with death than we have been in many generations, but I think it’s more than that. I think, like me, people have gone to the boring, templated funerals of their loved ones and realized they deserved better.
‍

Millennials, the harbingers of the personalization movement, are at their oldest a mere 41—an age at which death is unlikely. And yet these are the people disrupting the way things have always been done. From the digitalization of navigating life after loss, a push for greener burials and even gamifying end-of-life planning, the death industry is experiencing a golden age of innovation and disruption. Death is having a moment.

Just as startups in the consumer goods industry have exposed supply chain markups and fought for transparency, entrepreneurs and savvy consumers are examining the amount of waste and price-gouging in the funeral industry. The average funeral in the UK costs between £8-£10,000, though many people spend much more. Traditional funeral homes routinely pressure-sell more expensive urns, caskets and other add-ons that—while largely unnecessary—are equated with giving your loved one the very best.
‍

“The sad fact is that poor people spend more on funerals than rich people do,” says Derrick Grant, serial entrepreneur and founder of Willow, a supplier of wicker and cardboard coffins and advocate for greener, fair-priced funerals. After watching a friend fall into severe debt burying his young wife and still not be able to afford a proper headstone, Derrick moved from his career in product management to launch Willow. “People should not have to take a payday loan to bury a loved one,” he says, “and the markup on a coffin is sometimes as high as 200%.” Pushing for price transparency is one aspect, but Derrick also shared some shocking stats about the environmental impact of death.
‍

He told me that while most people choose cremation believing it’s best for the environment (avoiding burying a casket and all the embalming chemicals in the ground), it’s actually much, much worse. “When you cremate a person, every bit of carbon that was in their body is released into the atmosphere. And any piece of metal—their fillings, implants, new hips—the mercury from that goes right into our fish.”
‍

That was a shocking fact to hear so I looked it up and in fact, nearly 7% of all mercury found in our environment can be attributed directly to cremation. And the glossy, chemical-laden caskets cremated with the body are full of plastics, toxic formaldehyde and layers upon layers of polyurethane. A casket that, Derrick points out, isn’t needed at all.
‍
“Those fancy handles you upgraded to are snapped off, chucked in a bin and resold,” he says. But even a cremation in a cardboard or natural wood box still uses a significant amount of energy and has a gigantic carbon footprint.
‍

Traditional burial, however, is not much better.
‍
“Embalming is a completely pointless process. We’re not keeping bodies around for extended periods of time for viewing, and modern freezing technology would be sufficient preparation for burial. It’s more chemicals in the ground and another profit center for funeral homes.” Formaldehyde, glycerin and other toxins in embalming fluids are set into the earth at an estimated 4.3 million gallons per year. Holy f*ck.

While we make conscious choices in our daily lives to reduce our carbon footprint, our own death may undo all the good of our “meatless mondays” and biking to work. “The nutrients from our bodies can literally nurture the earth, and yet the entire funeral industry profits from us doing the exact opposite.”

"The nutrients from our bodies can literally nurture the earth, and yet the funeral industry profits from us doing the exact opposite."

“I was sitting at the kitchen table with my mom googling ‘what is probate’ and literally just trying to figure out what to do next.” Emily Cummin, CEO of Untangle built an app to help people who found themselves in her position—in grief, inexperienced with loss and with no clear process to follow.
‍

“Everyone is going to go through this at some point. It's a universal experience. With weddings, you have wedding planners and checklists and procedures. For pregnancy, you have classes and guidance. For the end of life, you have hospice and doulas to help with the death, but for everything that follows it’s a big mystery.”
‍

And like Derrick, Emily feels this mystery perpetuates the opportunity for extra costs. “If you don’t know where to go, you’ll listen to the first person who talks to you. And that person is typically a funeral director or estate attorney with their own ulterior motives—having you spend as much as you can with them.”
‍

Frustrated by the process of navigating her grandfather’s death—and finding that even in 2020 everything was still done largely via paper—Emily spotted an opportunity to use her business strategy background and digitize the process in a meaningful way.
‍
But it wasn’t just about the process. “I just wished there was a person to call when I felt lost.” Untangle members (at a very reasonable £6 per month, we were surprised to discover) get 24/7 access to someone just like that, to navigate both the logistical side of processing a person’s passing and support for grief, as well. They even match virtual grief groups based on commonalities.
‍

Digitalization has also shown up in other, less expected innovations in the death space. Like digital memorials—a GPS trackable sensor buried with the person that replaces a traditional headstone, especially for those buried in woodlands or natural reserves where green burial is permitted. Digital memorials from startups like After preserve stories and files to share memories after people have passed—with no spoilers, I can’t help but think of The Startup Wife by Tahmima Anam.

When I was pregnant with my twins in 2017, I ran out of nesting and so I started looking for more things for us to do to prepare for the babies. My cousin, the financial planner, suggested we do some estate planning. My husband and I—two freelancers who couldn’t even afford a vacation, let alone the two kids about to join us—laughed and went out for tacos. “Who needs estate planning?!” we shrieked after upgrading to the guac (treat yourself). “We have NO ESTATE.” We got as far as “throw me a viking funeral and burn me on a pyre” (his) and “canapés and a string quartet playing only Taylor Swift covers” (mine).
‍

“Typically, people only plan for their end of life when they experience a health scare—theirs or a family members’,” says game designer and creator of the end-of-life-planning board game ‘When My Time Comes’ Jenn Kumer.
‍

“The problem with planning things in a moment following a triggering event is that there is already a huge amount of stress, anxiety and fear which makes the subsequent discussion around the subject very fear-based.”
‍

By having conversations early on through the form of a collaborative game, says Jenn, it allows for a group of people to create a shared dialogue and a moment of togetherness. “It allows the process to become a celebration of each person’s life and the shared connection.”
‍
‍
According to Jenn, planning conversations also typically focus only on the practical— finances, asset distribution, healthcare decisions and funeral planning—while the emotional aspects are ignored. “How can people best support you when you are in pain? What ideas do you have for a living legacy? Who would you like to receive a letter or video from you once you’re gone? These are also important questions that should be answered with the practicals and not left up to the surviving family once you’re gone.”
‍

As with Derrick and Emily, Jenn’s innovation was inspired by a loss. “Sitting in my grandfather’s funeral was the first catalyst. I was thinking how can I, as a designer, make this more human centered and emotionally connected, as the last chapter of someone’s life. I could facilitate a conversation for remaining family members.”
‍

The taboo of death, she feels, means talking about it and making plans for it is uncomfortable. “We rarely even view the body anymore. We’ve alienated death from our society and this distance means we are often unprepared.”
‍

Derrick also references this taboo. “We used to view our loved ones in our homes, but now we are separated from anything that could feel uncomfortable.” Each subsequent generation seems to be equipped with an even greater emotional vocabulary—and the psychological safety within greater and greater groups to express feelings like grief and hurt. As we innovate the way death is handled procedurally—we may also innovate the way grief and mourning are experienced and shared, perhaps returning to more outward displays of grief.
‍

While I doubt we’ll return to making jewelery from the hair of the deceased, the black arm bands that signify mourning—with their origins in regency England (Bridgerton fans, what’s up!)—made their appearance at Queen Elizabeth II’s funeral in September. Will we see more visible expression of loss? Will we (finally, somehow) learn what to say to someone who has experienced a loss?
‍

At the very least, in our lifetimes we are likely to experience some not-boring funerals that better represent our friends and families. The disruption of the death industry is as certain as death itself, and the innovators working to make it happen are literally breathing life into it to honor those we’ve lost. Dana is the founder of P&Co, the editor-in-chief of &ideas and a lifelong lover of reading & writing.